This is the second blogpost from my "technological narratives" series. The first was How Elon Musk takes Wikipedia's place. 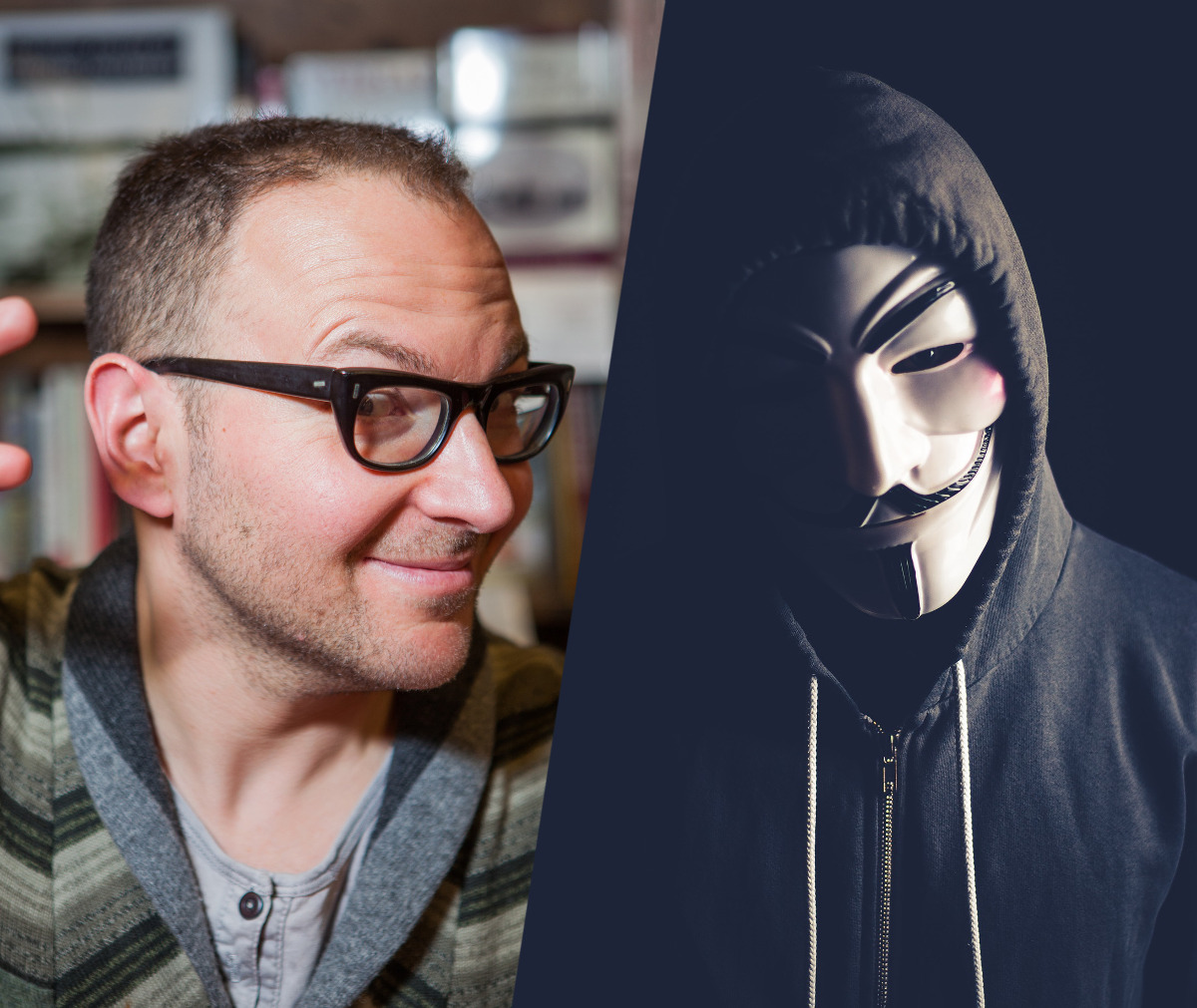 What might come to a surprise to a lot of people, the hacker movement exists outside of the Hollywood movies and computer games with a "hacking" skill. It's a full-fledged culture with its own set of values - like technological ownership and independence, a right to privacy, knowledge and cultural participation without limits.

Hackers are much more than black-hat cybercriminals and edgy teenagers breaking into school networks. How come we don't hear about hacker-inventors, creators of the infrastructure we all rely on - or activists pointing out the problems in the corporate systems all around us? Why have they become a cliche molotov-throwing anarchists while we completely omit squats and co-op culture?

Simply put, hacking culture does a very bad job at communicating its values and achievements to the mainstream. With very few dedicated advocates or storytellers understanding them, it's easy for a writer to use hacking as an aesthetic for their next book or movie, without questioning their own misconceptions or biases.

A lot of "tech wizards" characters in media - be it Wade from Kim Possible for kids or lab techs from CSI Miami for adults - are exactly that: wizards. People skilled in "computeromancy" perform complex rituals in their ivory towers (basements) to get whatever is needed to get the plot forward. They don't question what technology is or how the main character uses it: they just "do hacking" and something happens.

Using "computeromancy" as an aesthetic makes true hacking much more tame and hackers' criticism of our capitalist culture - toothless. They're dangerous because they're skilled criminals / geniuses, not because they see more than us or raise valid points against how we use technology.

In the end, this dismissal is not as problematic as another aspect of hackers in popular culture: the total omission of community and working together, which are a core of hacker's ethics. The basic values of Free Software not only allow, but also celebrate every participant in the creative process. No hacker is able to work without the support of a vast network of colleagues and contributors.

Contrary to this, Hollywood usually paints hackers as lone wolf cybercriminals, working from their basements - or system smashers ready to set the world on fire. Those individuals are either on a crusade or just don't like other people. They don't build or create. They don't contribute to our knowledge and if they boast their skills - it's just a magical trick to wow the main character, not "my code protects Linux servers all over the world".

The anti-social image may have started as an honest misunderstanding, since most computer wizards don't go to parties. It's easy to portray them as... you know... loners. It took popculture several years to get that - oh! You can do things online! Yet even with that, hackers' IRCs, mailing lists and bugzillas stand incomprehensible - since there's just... text. How is that interesting? Where are the pictures? Quickly, let's show a Matrix letter soup!

Even when writers decide to portray the technology accurately, those social interactions and motivations behind hackers are a total enigma to them and easily replaceable with an aesthetically-suiting bloody rebellion. Let's take Mr Robot: a story akin to Fight Club, where a group of tech people is forced by a bloody and unstable maniac to work together to bring down a corporation. It has nothing in common with a hackerspace, a community creating something and contributing to a common goal as they will, when they will.

Personally, I see Mr Robot as bringing hackers much more harm than good. While it improved the understanding of potential technological threats among the regular people, it didn't show us any way out of the problems. It just re-told the whole story of rebellion which has nothing else to offer other than a system to smash. And again, hackers are the system-smashers, out there to wreak havoc and hurt the billionaires but only a little more than they hurt regular people.

How likely is it for a regular person, or better, a legislator - to listen to hackers policy proposal? They couldn't have anything valid to say! Everyone knows they're just out there to sow chaos.

It gets even worse with computer games. While the first Watch Dogs installment had much more to do with bloody Punisher comics than any hacker community, the sequel decided to be more ambitious and show a real hackerspace. The writers actually went to Noisebridge, one of the most diverse and creative hacker communities in the world, hosting a wide variety of events and workshops for people of any age and skill level. They took photos, spoke to people - and made a game inspired by that. A game in which you 3D-print guns and drones and then go around San Francisco to shoot people who don't agree with your idea of social justice. Literally killing people doing their jobs, just so that you can get at the "big baddie" tech billionaire. Oh what a hero you are.

Luckily, they didn't use the name of Noisebridge. They repeated yet another skewed vision of what hackers are, based more on aesthetics and half-processed ideas than anything else - this time targeted mostly to teenagers and young adults. The audience didn't hear about local outreach projects, electronics workshops, DJ meetups or bike fixing nights. They saw a hacker shooting his way to the top execs.

So, who are the hacker-heroes in the popculture then? Who are painted as the "good guys"?

Why, startup CEOs of course! In Alyssa Milano's "Hacktivist" comic book (soon to be a TV series), Tunisian rebels are fighting the oppressive state. Since no one has ever heard about non-white people achieving anything on their own, they can be only helped by save_yourself group, which just happens to be the CEOs of their universe's Twitter/Facebook corporation. The whole story ends up being a billionaire's dilemma of how much he can sacrifice to help other people.

Sadly, the capitalist narrative is so prevalent in the western culture that it creates another layer of distortion on the hackers. People making money are good. People working with unknown agendas (we cannot call them commies today, can we?) are bad. Don't trust those Free Software fellows, nothing can be free, everything needs to have a price to be fair.

The European hacker culture and some American anarchist communities may be able to resist this notion, but if you want to create technology anywhere outside of these lands, you'll need to call yourself a startup and serve some nice corporate overlord. Want to build something in Gaza? Go to an incubator. A hackerspace in Kenya? You mean a fab lab? An innovation hub maybe?

With that many bad examples, are there any good stories of hackers in popular culture?

The most obvious and best example would be Cory Doctorow, who has dedicated most of his writing career to sharing the hacker values. His Makers approaches the topics of inventiveness and communities from different angles. In Pirate Cinema he looks at anarchist communities sharing and creating new works of art. Little Brother and Homeland are stories of young hackers' rebellion against an oppressive government.

Even though widely published, Cory's books don't make a big change in how hackers are perceived by the general public. His writing often focuses on what and how, and doesn't always explain why some people decided to work with technology. These reasons are evident for all the people around the technological and hacker culture, but may be not as clear to an average Joe.

Moreover, Doctorow's works focusing on the hacker movement - Little Brother and Walkaway offer a vision of a rebellion against the system. A fight of some exceptional individuals, while regular people are bystanders or collateral damage. It offers a vision of wartime hacking, not peacetime hacking, available to everybody.

If evil and abusive governments are the only reason we want our technology democratized, we may fail to convince many people to join our cause. We need to tell realistic stories of peace and progress in a world proposed by hackers, accessible to everybody.

When I got Cory Doctorow's Walkaway in my hands, I believed that I found such a perfect book. With a premise of people walking away from corrupted capitalism and forming their own little communes it started perfectly! Sadly, (about 40% in), it pulled a deus-ex-machina and the premise changed from daily lives in a totally different society to a full-scale war using science-fiction-y technologies. A vision which could be painted as real - became a fairy tale of trumping capitalism with transhumanism.

I believe that we need narratives for both wartime hacking and peacetime hacking. We need to show people that a world which functions differently than our current one is possible without magical technologies. To explain that hackers have a lot of good ideas how to assure we can live and progress together.

We need more writers and storytellers to share the true hacker perspective of openness and community approach, and we need them badly. Cory has already paved us a great path to the popular culture, and all we need to do is share our stories in a format available to non-hackers.

A few stories explaining why we want the technology to be open, a novel, or perhaps even an essay, painting a world in which the bakers and the schoolteachers can use what we created without needing to code themselves, without dedicating their lives to rebellion against the system.

With that, we may finally be seen as people and creators, not just mindless rebels.

Huge thanks to Star and G from Commando Jugendstil for helping me with the blogpost!